A journey through festivals: an itinerary dedicated to film enthusiasts, tourists and insiders, among the initiatives supported by the Calabria Film Commission Foundation (within the framework of the Public Notice for the support to the realisation of Film and Audiovisual Festivals and Reviews in Calabria 2022), led by the Extraordinary Commissioner Anton Giulio Grande, and that will unfold in our region during the summer, until 18 September. An artistic pathway that includes the presentation of 20% of the programming of films and products made in Calabria, reinforced by the presence, at each event, of a panel from the Calabria Film Commission, of a cultural and informative nature.
Festivals and reviews, embracing the entire Calabrian territory, from Castrovillari to the seafront of Reggio Calabria, in a journey through places and moments in which the cinema will act as an element in the encounter of cultures and a leitmotif between stories, traditions, reflections and in-depth studies. Without forgetting – indeed, highlighting and enhancing – the cinema-territory relationship, with festivals set in particular contexts and landscapes, between the recovery of villages and a look at Magna Graecia.
Different focuses, different themes, different genres are at the centre of the proposals of festivals and exhibitions. It also aims to internationalise initiatives and cultural offerings: as in the case of one of the festivals that is having great resonance and prominence even outside our country, namely La Guarimba International Film Fest, now in its tenth edition and which every year turns the cinema lights on the splendid Amantea, where many young filmmakers from all over the world gather.
Short films are the protagonists of La Guarimba: and the short film seems to be one of the expressive tools that young artists in particular are focusing on today. So, for example, for many years a charming village such as Pentedattilo has come alive through the works of international filmmakers participating in the Pentedattilo Film Festival, also loved by Vittorio De Seta, who shot his last work here. Also dedicated to short films are the Castrovillari Film Festival, which also moves between an international vision and the promotion of the region, the Calabria Movie International Short Film Festival, in Crotone, which focuses on Calabrian cinema, and the Mediterraneo Festival Corto, which takes us to another Calabrian pearl, Diamante. While dealing with short films, but not only, aiming at the valorisation of young and independent cinema, with a special focus on the development of film activity in Calabria, the Stretto Film Festival in Palmi.
Genres, productions, guests, and reflections on the world of cinema come together in the programme of the Reggio Calabria Film Fest (now in its 16th edition), hosted on the most beautiful kilometre in Italy, that is, on the seafront of Reggio Calabria and, to be precise, in the evocative Arena dello Stretto. A range of screenings and encounters on various themes – with spaces also dedicated to debut films, shorts, monographs – is also at the heart of the Lamezia International Film Fest, which, on 12 July, inaugurated this long journey between festivals. As of this year, there is also a “Terrace on the Sea”, with the first edition of the Cinemediterraneo Film Festival, in the beautiful location of San Nicola Arcella (with its “cinematographic” Arco Magno), including screenings, guests, workshops and masterclasses. And again, cinema that looks to the future and new technologies, with I-fest, staged in Castrovillari; the focus on international independent cinema, with the Gioia Tauro Film Festival; the relationship between cinema and music with the Soundtrack Festival.
Not forgetting the Magna Grecia Experience, which in Montauro (Catanzaro), a village overlooking the Gulf of Squillace, proposes an itinerary between in-depth studies on the world of cinema, aimed in particular at young people, and screenings and meetings on socially relevant topics.
But that’s not all: alongside the festivals, there are also six festivals, with different themes or genres characterising the programmes.
From the very close relationship between storytelling and territory, in Fuori Campo 3 – Cinema embraces history, which takes place in some of the most important archaeological sites in the region (from Sibari to Capo Colonna, from the Scolacium Park to Locri and Monasterace), continuing with the focus on history and archaeology, with the Rassegna del docufilm di beni culturali della Magna Grecia e dell’archeologia pubblica, in the Norman Castle of Santa Severina (Crotone); from documentaries, films and meetings and, again, the relationship between cinema and the territory, of E io ci sto – Cinema sotto le stelle, in Crotone, to musical cinema, the theme of FilMuzik, in Gioiosa Jonica, on the Reggina coast; from Cinema borghi – an exhibition of short films conceived for use, precisely, in Calabrian villages – in Roccelletta di Borgia, to the summer arena dedicated to auteur cinema of Cinalci estate, in Crotone.
A varied offer, therefore, for a journey into the territory that tells about itself and the world through cinema. 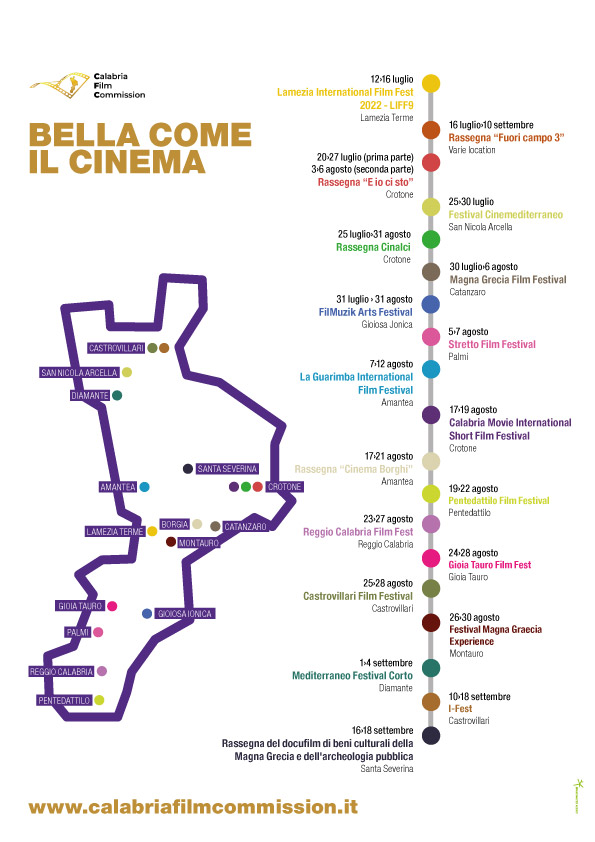